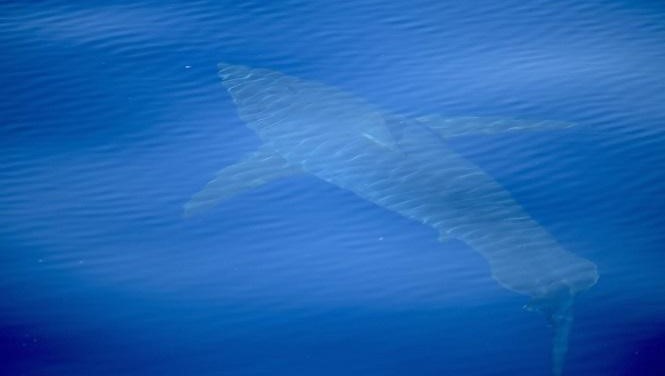 White Shark Spotted at Majorca, the First in Decades

White Shark Spotted at Majorca, the First in Decades. For the first time in minimum 30 years, a living white shark has been spotted again in Spanish waters. Scientists saw the five-meter-long copy swimming at Majorca yesterday, reports the marine research centre Alnitak on Facebook.

The scientists are currently on the expedition and spotting the whites or sharks at around 10 o’clock yesterday at Cabrera, an uninhabited island about twenty kilometres south of Majorca. , We have documented the presence of the shark for 70 minutes, “says Alnitak director Ricardo Sagarminaga from Buiten on the Facebook page of the research centre, said by Down Town News.

The Diario de Majorca newspaper speaks of a “historical perception”. It is the first time that a living specimen was seen in the waters around the Balearic archipelago. ‘In the past, we saw relatively often dead specimens that had become trapped in the nets of fishermen’.

In recent years, according to Sagarminaga, several rumours circulated about the presence of white sharks in the Balearic Sea (the part of the Mediterranean between the Balearic Islands and the Spanish mainland) and there were unconfirmed observations. “This is the first scientific observation of this shark species in Spanish waters in at least 30 years. The shark was photographed, filmed and described by a team of ten people from five countries. “

The presence of white sharks in the Spanish waters was, according to the Spanish Dutchman, a persistent rumour and also a historical fact, supported by photographs and names of locations in the waters to the east and west of the Balearic Islands. “For years, however, it was impossible to document a white shark in the way that we have done on board our research vessel.”

What is Skin Rejuvenation? How Does It Work?