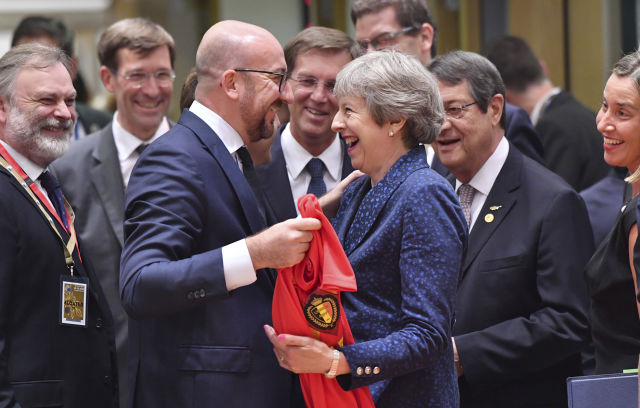 Prime Minister Charles Michel has given his British colleague Theresa May a shirt of the Red Devils. He did so in Brussels just before the start of a crucial EU summit. The shirt is to the great laughter of the other EU leaders and May itself number 10, the house number of Mays official residence in Downing Street in London.

Michel gave British Prime Minister Theresa May a sweater of an attacker and captain Eden Hazard just before the start of the meeting. Jean-Claude Juncker, the President of the European Commission, received a scarf, which he passed on to Leo Varadkar, published by the Right News.

The Irish prime minister said this morning at a meeting of the European People’s Party EPP to the BBC – after a brief hesitation – that he will soon not support for England, but for the Belgians. “I am in Belgium, so I support the home country”, he explained afterwards.

The choice of Varadkar is not entirely inexplicable, given the negotiations about the Brexit still stuck. No solution has been found for the Irish border issue, for example, Europe and Ireland want to avoid a stable border with Northern Ireland at any cost, but the British do not want Northern Ireland to still belong to the single market after the Brexit.

The Austrian Chancellor Sebastian Kurz also got the question for whom he will be supported later, but he shrugged his shoulders. Next round, there seemed little tension between the “competing” EU leaders.

The competition starts at 8 pm, shortly after the 28 leaders have started their working dinner on migration.